He purpose of this article is to answer the question, "Is it Illegal to play online poker in Australia?".

The short answer is: Australian law does not criminalise playing online poker on your computer or mobile devices and in no way targets the individual poker customer. Online poker is legal in Australia for Aussie citizens.

However, prohibitory legislation has had an impact on the online gambling industry and has contributed to a smaller menu of gaming choices for Aussie poker fans. This is because the laws related to online poker and gambling target the operators and their AU-friendly poker websites, not the consumers who play poker on those sites.

All punishments stipulated in the applicable laws apply only to the corporations running the poker sites and, in some cases, to the executives of these firms. These online poker laws are not intended to and subsequently do not penalize regular citizens who enjoy playing poker online. The authorities probably recognise that they would unleash a vocal backlash against themselves if they attempted to persecute behaviour that millions of citizens engage in on a regular basis and deeply enjoyed by the citizens of Australia.

While this short answer provides a quick set of facts, many Australian citizens will be curious to learn more as evidenced by the frequent emails we recieve with the subject lines of Online Poker Australia. We've decided to examine Australian law in order to provide some guidance as to how the legislative and legal landscape in the country affects internet poker and its practitioners.

With this being said, let us now take a look at the various anti-gambling statutes that have been passed over the years and see how Australian online poker law affects players, companies, and other entities that have a stake in the game.

With the first internet gaming services having only popped up in the late '90s, it understandably took a while for Australian law to catch up. The Interactive Gambling Act of 2001 was the first serious attempt to update gambling laws to take account of this new development. Like many first attempts to accomplish something, it failed to achieve its objectives.

The intent of this legislation was to prohibit unlicensed casino, sportsbook, and poker operators from providing their services to Australian customers over the internet. Because there was no licensing regime for internet casino and poker activities anywhere in the country, these forms of wagering were basically banned at least in theory.

However, loose wording and poor definitions mean that clever lawyers retained by leading online gaming sites were able to run circles around the Interactive Gambling Act. The body tasked with investigating violations, the Australian Broadcasting Authority, had to liaise with police forces to proceed with enforcement actions. This need for bureaucratic multi-agency coordination added further delays and uncertainties to the process, meaning that the Act was, for all intents and purposes, toothless.

Given the flaws inherent in the Interactive Gambling Act and the difficulty of initiating prosecutions, offshore real money gaming organisations continued their business endeavours largely without interference from the Australian government.

Online poker in particular experienced a boom especially following Melburnian Joe Hachem's victory in the 2005 World Series of Poker Main Event. PokerStars, PartyPoker, 888poker, and all the other big names in the industry were active in Australia throughout this time.

Only One Conviction Occurred

There was only a single criminal conviction recorded under the terms of the Interactive Gambling Act. In the latter half of 2015, Luke Brabin, a noted Australian poker, started running his own online poker site, called Poker Asia Pacific, which accepted Australian customers. He quite understandably believed that no action would be taken against him given the fact that his international competitors were able to ply their trade unimpeded by the law.

Brabin made the mistake of basing his operations on Australian soil, and he was soon prosecuted by the authorities. He pleaded guilty to one count of “intentionally providing an interactive gambling service to customers in Australia,” and in May 2017, Luke Brabin was convicted and had to pay a fine of $10,000. 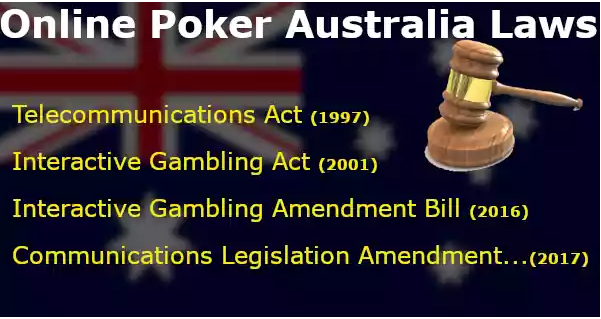 This bill modified the wording of the existing Interactive Gambling Act to strengthen it. Many of the ambiguities in the original Act were cleared up, and investigative powers were handed over to the Australian Communications and Media Authority (ACMA), the successor to the Australian Broadcasting Authority.

Importantly, the ACMA was given the power to proceed with enforcement largely at its own discretion without having to team up with police departments. It can levy civil fines against lawbreakers on its own initiative. Individuals who were found to be violating the law could receive fines of up to $1.35 million per day while corporations could be fined to the tune of up to $6.75 million per day.